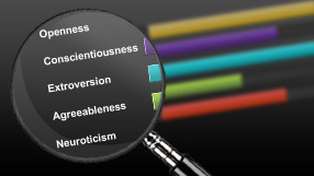 Researchers have proposed that there are five basic dimensions of personality, known as the big five. These personality traits represent the most important qualitites that shape our social landscape. Since the 1960's research has been going on to determine if there is a relationship between the factors that make up personality and leadership.

The Big Five factors are Conscientiousness, Agreeableness, Neuroticism, Openness, and Extraversion. Some researchers label the traits as CANOE for a way to remember each factor more easily.

CONSCIENTOUSNESS features high levels of thoughtfulness, and goal-directed behaviour. Being mindful to details, organized and dependable fall under this dimension as well. Of the Big Five factors, conscientousness has been related to leadership second most strongly.

Examples:
- I am always prepared

AGREEABLENESS includes attributes such as trust, kindness, and affection. They value getting along with others and are generally considerate, helpful, and friendly. Agreeableness is positively related to good team work skills but negatively related to good leadership skills. People in this category would be more of a follower then a leader.

- I take time out for others

- I feel others emotions

NEUROTICISM is the tendacy to experience negative emotions such as anger, anxiety, or depression. People high in this trait usually experience emotional instability and are vulnerable to stress. They are often in a bad mood. Neuroticism is moderately and negatively related to leadership.

Examples:
- I am easily disturbed

- I change my mood a lot

- I get stressed out easily

OPENNESS features characteristics such as being creative, curious, insightful, and informed. Oppeness is sometimes referred to as oppeness to experience. Those high in this trait like adventure, have unusual ideas, and a big imagination. It is suggested that leaders tend to be higher in openness than non-leaders.

Examples:
- I have excellent ideas

- I have a rich vocabulary

- I use difficult words

EXTRAVERSION is characterized by having positive energy and emotions, excitability, sociabilty, and assertiveness. Those high in this dimension enjoy being with people, and are likely to say 'Yes' to opportunities for excitement.  Extraversion is the personality factor that is most strongly related to leadership, and is described as the most important personality trait of effective leaders.

Examples:
- I am the life of the party

Some research has proven that the Big Five personality traits are universal. One study showed that from more then 50 different cultures the five dimensions could accurately be used to describe personality.

The major criticism for the Big Five is that it does not explain all of human personality. They feel it neglects other domains of personality such as religion, honesty, and sense of humour. Another criticism is that the Big Five personality is not theory-driven but data-driven which means information is put together under factor analysis.